On the evening of October 22nd, Carruthers and Davies make their way to Dollman’s residence for a dinner party. Carruthers gives no clue as to the food that is taken, but it seems to be a strange combination of formality and informality, with no waiters but several courses, and lots of good booze:

No servants appeared, and we waited on ourselves. I have a vague recollection of various excellent dishes, and a distinct one of abundance of wine. Someone filled me a glass of champagne, and I confess that I drained it with honest avidity, blessing the craftsman who coaxed forth the essence, the fruit that harboured it, the sun that warmed it.

Hunting around for a model for this party, I settled on one from a writer we’ve already discussed: Isak Dinesen, aka Karen Blixen, whose short story ‘Babette’s Feast’ became a memorable film in 1987. Now, I’m cheating a bit here, location-wise. Anyone who’s seen the film will get the impression that the landscape might be similar to the East Frisians, but that’s because the film was made in Denmark. The actual setting for the original story was Berlevåg, right up at the top of Norway. 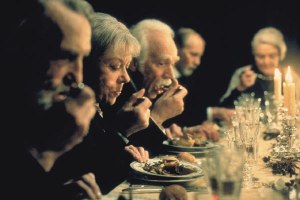 In the story (and warning – PLOT SPOILERS – if you’ve not read the story, it takes about 30 minutes, and is well worth your time) two elderly sisters, Martine and Philippa, live in a distant religious community founded by their deceased father. The sisters have a French maid-of-all-work named Babette, who had appeared at their door one June evening twelve years before, in 1871, desperate and afraid and on the run. She was a Pétroleuse – a woman who set fire to houses during the Communard uprising in Paris – and she had been sent to the far north by an acquaintance of the sisters who wished to help her.

Babette becomes a key part of the sisters’ household, but acquiesces in their insistence on plain and simple food. But then, one day, the French lottery ticket that Babette has been holding on to comes up, and she wins ten thousand francs. The sisters assume Babette will leave immediately, but she asks that they let her cook a meal for them, on the hundredth anniversary of their old father’s birth. But the meal must be a French meal, truly French. And she must be allowed to pay for it.

So the day arrives, and ten old members of their father’s congregation come to the sisters’ house to eat Babette’s feast. And, of course, it is like nothing they have ever eaten before. Here is the menu:

There is one other dinner party model we should look at, and it’s one of the most extraordinary tales we’ve come across in this Adventure. We were alerted to it by our friend Ed Freyfogle (ahoy, Ed!), who asked us on Twitter if we’d ever heard of a sketch called Dinner For One. We hadn’t.

It’s a charming little thing, true enough – a vaguely Edwardian scene featuring an eccentric old lady, her imaginary dinner friends, and an increasingly inebriated butler. But that isn’t what’s amazing about this clip.

What’s amazing is that this sketch is among the most repeated bits of television in the world. It was first recorded in 1963, a year after German entertainer Peter Frankenfeld and director Heinz Dunkhase saw Freddie Frinton and May Warden perform it live on stage in, of all places, Blackpool. Frinton had been performing the sketch, originally written in the 1920s by Lauri Wylie, for twenty years.

Frankenfeld and Dunkhas found it hilarious, and paid Frinton and Warden just over 4,000 Deutschmarks each to perform it on the Norddeutscher Rundfunk show, Theater am Besenbinderhof, filmed in Hamburg before a live audience.

Here’s where things get a little weird.

The film of that long-ago performance in Hamburg is now a staple of northern European television schedules. In Germany, up to half the population watch it every New Year’s Eve. It’s also a New Year’s Eve tradition in the Nordic countries and, of all places, South Africa. In Sweden and Denmark it was taken off-air for a while because of worries about its depiction of heavy drinking, but had to be brought back under the weight of popular demand. The sketch is usually shown in English, without subtitles, and many Germans can quote the dialogue verbatim. The phrase same procedure as every year, which is repeated throughout the sketch, is a famous catchphrase in Germany, as well-known as this is an ex-parrot.

And not one single British person we spoke to when we discovered this had ever heard of it. What is it about British cultural exports that take on an entirely new life when they reach Hamburg?

We have, of course, gone off on a complete tangent from Carruthers and Davies at a supper-table in Norderney – but that, after all, is the joy of this adventure. And we like to think that the supper the chaps enjoy probably lies halfway between Babette’s Feast and the Dinner For One – a rather classy menu, dominated by copious amounts of booze.

2 thoughts on “‘Well, are we never going to have supper?’”