I’ve waited until Tim’s away on holiday to write this post, for reasons which will become obvious.

Back in July, we had arranged a day in Norfolk to visit a boat which we had thought might be similar to the Medusa. However, the chap who owned said boat cancelled on us at the last minute, so we had a day to spare and nothing to fill it with. I suggested we re-enact the one part of the ROTS journey which it is now impossible to completely relive: the journey Carruthers makes from London to Europe via Flushing steamer. We wrote about this particular section of the book here, but in summary the journey looked like this: Carruthers takes a train from Victoria, changes trains at Sittingbourne for the special steamer train, which takes him up a branch line north towards Sheerness before branching off onto a spur at Queenborough, along a dedicated railway line and onto a pier in the River Swale, where the steamer for Flushing (aka Vlissingen) awaited.

I found this fragment of OS map which led me to believe the pier was just south-west of the pleasant little harbour town of Queenborough:

We backed up this wrong-as-it-turned-out assumption by asking a fellow in the House at Home pub in Queenborough where the old pier was, and he pointed us in the same direction. But, thinking about it, the chap was a German, and may have had Ulterior Motives.

So off we went on a very pleasant walk, finding an abandoned railway line (check!), leading to a pier in the Swale (check!) with a buffer at the end of it where the train would stop (check!). We recorded a podcast all about our visit, and all was good.

All was good, that is, until a week or two later when I stumbled across the website Old Maps Online and this old map of Queenborough from the 1930s (click on the map below for a higher resolution version): 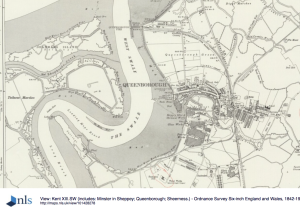 The map clearly shows another pier – named, ominously, Queenborough Pier – at the end of a branch line running north west from Queenborough station. I realised, after a little more research, that I had indeed taken us to the wrong pier. The wrong pier entirely. The pier I had taken us to was the old industrial pier, which was used until the 1970s. The passenger pier was to the north, and had been an altogether bigger affair, one which is sadly no longer visible unless the tide is low, when one can see the pilings. Even the line of the old railway is inaccessible as it runs through private industrial land.

So, my apologies to all those who listened to our Queenborough podcast. Much of what we said was right, and certainly the atmosphere was perfect. We probably saw more of the ‘steamer experience’ by being at the wrong pier than the right one, but somehow I don’t think that’s going to stop Tim ribbing me mercilessly for months to come over this research cock-up. If you want to find out more about the real Queenborough passenger pier, you could do worse than read this page.

As I should have done.

But here’s a nice slideshow of our visit, anyway!

My thanks to Club member John Ironside for the link to the Queenborough Pier page, and for all those who commented on the original podcast!