James Bond, as any fule kno, drinks martinis. And Scaramanga, his arch-enemy in The Man With The Golden Gun, is an elegant assassin in a Pacific island hideaway.

Except none of that is true, outside the very narrow world of the movies. In Ian Fleming’s novel, Scaramanga is an assassin, but with a rather prosaic sideline: he’s a hotel developer. And Bond, of course, drinks widely and gleefully, as this extract from the book shows:

The red-coated barman asked him what he would have and he said, ‘Some pink gin. Plenty of bitters. Beefeater’s.’ There was desultory talk about the relative merits of gins. Everyone else seemed to be drinking champagne except Mr Hendriks, who stood away from the group and nursed a Schweppes Bitter Lemon.

Pink gin is a very simple matter, really – it’s essentially gin and angostura bitters. What is more, it tends to be Plymouth gin which is drunk, as the Plymouth brand is sweeter and, historically, more associated with the Navy. Pink gin, you see, is a navy drink. Bitters were given to Royal Navy officers, in particular, from around 1820, when it was discovered (by a German, no less) that they settled sea sickness. The English being the English, it was not long before some bright spark decided booze was needed to make the seasickness treatment more palatable, and the pink gin was born. By the second half of the 19th century, it was a fairly common sight in English bars. By 1898, it appears to have made its way to the East Frisian islands, where Davies encounters it on his only solo outing ashore.

As a Navy man, it seems unlikely that Bond would have been asking for a pink gin with Beefeater’s, a London gin. Perhaps Fleming let his legendary attention to the details of pleasure slip. It’s even more unlikely that Davies, out in the East Frisians, would have been drinking English gin at all. So what did he pour his bitters into?

Gin takes its name from a Dutch spirit, genever, which was originally made from malt. These days, there are two types of genever, ‘old’ and ‘young’, the former brewed from malt, the latter from grain or sugar or a combination of the two. In the East Frisians, there is a very definitive version of ‘young’ genever, brewed entirely from grain, and with its own European Union protection.

The most famous version of this East Frisian ‘genever’, which we could call gin or even schnapps depending on the audience, is Doornkatt. 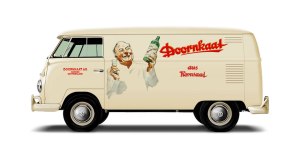 This is still a very famous drink brand in Germany, having been founded by a Gröningen Mennonite named Jan ten Doornkatt Koolman in 1806 in Norden, the biggest town on the mainland opposite the East Frisians. It’s highly likely that this is the gin that the men were adding bitters to in their Wangerooge bar.

Doornkatt isn’t widely available in the UK, but there was an attempt to find a market for it in America in the Sixties, as this print ad shows:

In Germany, Doornkatt is famous as the preffered tipple of Horst Schlämmer, the creation of comic actor Hape Kerkeling, Schlämmer is the fictitious deputy editor of a local newspaper who likes a drink and a flirt. You can get an idea of what he’s about in this clip:

3 thoughts on “‘A sort of inn, where they were drinking pink gin’”