Regular podcast listeners might have heard a whoop of delight from me a couple of editions back when it transpired that there was an ‘Inselbahn’, or island railway, at Juist in 1903. This was the first of a suite of narrow-gauge railways on the five biggest islands, four of which are still in operation – on Borkum, Langeroog, Wangeroog and Spiekeroog. The railways actually perform a pretty important function, as these islands are nearly car-free for most of the year.

What got me excited, though, was the appearance of a railway line which seemed to be crossing the sea at Juist. Could it have been, I wondered, that Childers wrote his extraordinary story of boats feeling their way across the sands, just as a railway was being driven through from the mainland to make all the pottering about under sail pointless?

No, of course not. It’s too far, much too far, to drive a railway from the mainland to Juist. What the railway did do, however, was make it possible to run a regular ferry service to Juist by building a pontoon at deep water and then running a track to the island across the sandy shallows.

This is what was built, and opened, in 1898 (the year after Childers sailed these islands, remember, so he wouldn’t have been aware of it). Initially, it was a horse-drawn affair, but it closed after only three months because of storm damage, reopening in a different place, and with motorised engines, in 1899.

The rail ran out to the pontoon until 1982, when the track was closed down after a new port was built on the island itself. What we are left with is a series of quite extraordinary photos and videos. My favourite is this one, from 1980, showing Germans in their holiday finery, and reminding me very much of my own family holidays in Blackpool, before showing the extraordinary sight of a train travelling on the sea itself.

And here are some photos, courtesy of Wikimedia Commons, of the Juist Inselbahn in the past: 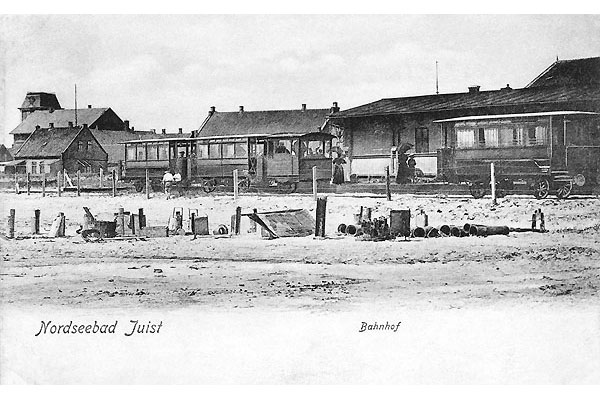 One thought on “The ‘inselbahns’ of the East Frisians”