It doesn’t take long on September 26 for Carruthers to start sloughing off his London snobbery and relax into the adventure on board Dulcibella:

‘There was left a fashionable and dishevelled young man sitting in the dew and in the dark on a ridiculous portmanteau which dwarfed the yacht that was to carry it; a youth acutely sensible of ignorance in a strange and strenuous atmosphere; still feeling sore and victimized; but withal sanely ashamed and sanely resolved to enjoy himself. I anticipate; for though the change was radical its full growth was slow. But in any case it was here and now that it took its birth.

There are three things in this passage from which Lloyd and I can take inspiration. First, we can be perfectly at home with the idea of being ‘acutely sensible of ignorance in a strange and strenuous atmosphere’ – that’ll be us to a tee throughout September and October. Second, we are indeed ‘sanely resolved’ to enjoy ourselves. Third – and to my mind most important – there will be grog.

Grog is a word we’re probably all familiar with, and I guess we all take it be rum and water (usually with a bit of lime juice and brown sugar). In a previous podcast, I cooked up some using Pusser’s Rum, which is supposed to be based on the original British Royal Navy rum recipe. I was drawn to this rum because it feels like the closest thing to a true English sailor’s rum that you can get (unless, of course, you can get hold of some of the original navy stuff, which still supposedly exists in flagons hidden away in underground warehouses at various military stores such as in Munster, Antwerp and Bellefield – see here for the full story .

I also liked the idea of Davies & Carruthers drinking Pusser’s because post-Black Tot Day, the RN eventually sold the rum recipe to an eccentric millionaire called Charles Tobias, a keen sailor who kept a cheetah and a chimpanzee on board as companions. Tobias is exactly the kind of person we need in the Adventure Club – slightly bonkers, a sailor, keen on grog, and ultimately a ‘good egg’ because he’s raised millions for charity from his business.

Having said all that, I’m not now convinced that Davies would have brought his rum all the way from London, and he has no formal naval connections that would have allowed to get hold of anything akin to Pusser’s.

Far more likely is that he got his rum in Flensburg, which, let’s face it, was the rum capital of Germany at the time. It was the Danes who started importing rum via Flensburg from Caribbean islands such as St. Croix, St. Thomas and St. John. When the port became German, there was an explosion of over 40 ‘rum houses’ in the town including famous brands like Schierning, Dethleffsen, Hansen and Sun Mountain. At its peak, the Flensburg rum families were controlling up to 70 percent of the German rum market.

Today there is only one rum house left – Johannsen – which we obviously need to visit as part of our adventure in the autumn. And it’ll have to be Johannsen rum we make our grog with from now on, I think. 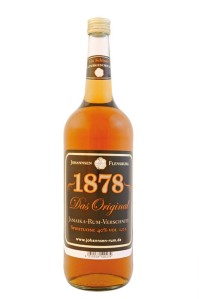 Flensburg still celebrates its rum roots, by the way, with a large sailing regatta in May called the Rum Regatta. If anyone out there is going to this, please do send us some details of what you get up to. And don’t forget to splice the mainbrace while you’re there!

p.s. a note from Adventure Club member Jon on grog:

‘A small detail to fill out your research, perhaps: are you aware it is from the sailors’ rum ration of grog that we get ‘proof’ as a measure of alcoholic strength from?

Occasionally, the sailors would be convinced the purser would be watering their rum rations, in order to sell the excess later to line his own pockets, and so would demand proof the rum hadn’t been diluted. And one thing naval ships had on board was gunpowder. So, the rum was mixed with a small quantity of gunpowder, and ignited. If it still burned, this was the proof the rum was still suitably alcoholic for their rations, and not watered. So this is why our 100% proof is just over 50% alcohol (about 57.5 to be exact) – the minimum quantity to still allow gunpowder to burn.

Frankly, the combination of sailors, rum and gunpowder makes me wonder how the Royal Navy didn’t lose a huge quantity of ships to mishaps.’