As has been stated previously, we are fairly sure of two things:

1. That Childers sailed his own boat to the East Frisian islands before writing The Riddle of the Sands, and thus would not need to make use of Flushing steamers and railways as Carruthers does.

2. That the action of the book is based in 1898 – this is entirely on the basis of the entry for October 22nd, which includes the phrase ‘it was Saturday.’ If October 22nd was a Saturday, the year must have been 1898.

So how would Childers have done his research in to getting Carruthers from London to Flensburg in 1898? He would have done the same thing that K— does on his own return from holiday:

‘Carter, bring me a Bradshaw’ – (an extraordinary book, Bradshaw, turned to from habit, even when least wanted, as men fondle guns and rods in the close season).

It’s a bit of an odd one, that passage – why does K— reach for Bradshaw, and not Carruthers? Perhaps Carruthers has already sneaked a peek. Or perhaps he always knew which way he was going to go.

Bradshaw was shorthand for a series of guides to railway and steamer timetables which were first published by printer and cartographer George Bradshaw in 1839, and which outlived him by over a century: the last Bradshaw was printed in 1961. The books combined railway timetables from Britain’s confusion of private train operators into a single volume and, as the railways spread throughout the continent, so too did Bradshaw, launching Bradshaw’s Continental Railway Guide in 1847. 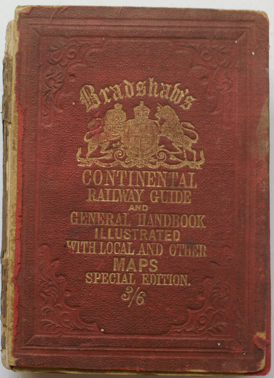 This was a time before rail nationalisation and then privatisation, before regulation of any kind. Railways were a private enterprise, and railway timetables were, too – analogous to football fixture lists or cinema listings in our day. Bradshaw collected them and then organised them in a triumph of data design; I have in front of me the British railway guide from 1910, and it runs to almost 1,200 pages, of which 200 are adverts for hotels and almost another 100 for steamers. This was the Good Hotel Guide, the railway timetable and the airport departure board combined into one volume.

The 1910 has a page for the South Eastern and Chatham Railway (which combined the old South Eastern with the old London, Chatham and Dover railways) which offers a ‘Table of THROUGH SERVICES from LONDON to the CHIEF TOWNS OF EUROPE.’ One could take a steamer to Calais, Ostend, Flushing or Boulogne, leaving from Charing Cross, Victoria, Holborn, Cannon Street, St Paul’s or Herne Hill (my local station). We know that Carruthers sails to Flushing in 1898, which meant an 8.35pm train from Victoria, a 10.35pm steamer from Queenborough in Kent to Flushing (see my previous post on this). If all went to plan, in 1910 this meant getting to Hamburg just after 5pm, for an onward train to Flensburg.

Carruthers obviously didn’t use the 1910 edition of Bradshaw for his book – but he may have used the 1888 Continental Bradshaw, and thankfully, for our purposes, somebody has kindly scanned this book in, in its entirety, a Herculean task only appreciated by those of us who find the beauty in timetables which my colleague so sadly lacks. Here is the relevant page showing through routes from London (click on the image for a full-size version).

In 1888, this journey would have taken Carruthers just over 24 hours, getting him to Hamburg at around 9pm London time, or 10pm local time. So, it appears that between 1888 and 1910, the journey time was shortened by perhaps four hours. In 1898, Carruthers steps down onto the platform at Flensburg at 10pm local time, which would not have been possible in 1888, but was relatively straightforward by 1910.

There are two types of people in the world: those who stopped reading this post at the first mention of timetables, and those who got all the way to the end. To the latter – I salute you. We are brothers and sisters in scheduling.

2 thoughts on “‘A ticket for Hamburg in my pocket’”