It’s quite a shopping list which Carruthers receives from Davies, a list which in itself is a thumbnail sketch of the single Edwardian gent. Nestled among it is a request for ‘a pound of Raven mixture’, with no further explanation given as to what this curious substance is.

This is one of those moments when you realise that your experience of The Riddle of the Sands from a hundred-year distance is bound to be utterly different to the experience of a contemporary reader – contemporary to the novel itself, that is. From our all-too-knowing vantage point, we see the words ‘Dresden and Berlin’ and we think, with a shudder, of what was about to befall those places; of what horror was going to come between the two brother-nations of Britain and Germany.

On a smaller, less horrible level, what would an Edwardian reader have taken ‘Raven mixture’ to mean? We’d never heard of it, but then Tim had the idea that what Childers was referring to here was Craven mixture, a famous blend of tobacco which, presumably, any contemporary of Childers would have recognised. It was, in other words, a kind of joke. 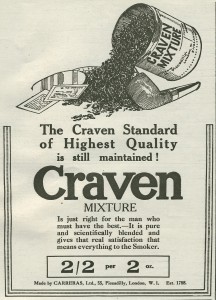 Craven was the creation of the Carreras Tobacco Company, a firm which had been founded by a Spanish nobleman, Don José Carreras Ferrer, who had fought alongside the Duke of Wellington in the Peninsular War (a lot of the information, and the pictures, for this comes from here). The company grew in reputation throughout the 19th century, under the guidance of Don José’s son Don José Joaquin Carreras. One of Carreras’ most distinguished customers was the third Earl of Craven, and Carreras created a special blend just for the Earl, one which quickly became popular across Britain. JM Barrie’s famous essay on smoking – My Lady Nicotine – refers to the ‘Arcadia’ mixture, and some have speculated this is a reference to Craven mixture, as this was known to be Barrie’s preferred tobacco.

One need only put his head in at my door to realize that tobaccoes are of two kinds, the Arcadia and others. No one who smokes the Arcadia would ever attempt to describe its delights, for his pipe would be certain to go out. When he was at school, Jimmy Moggridge smoked a cane chair, and he has since said that from cane to ordinary mixtures was not so noticeable as the change from ordinary mixtures to the Arcadia. I ask no one to believe this, for the confirmed smoker in Arcadia detests arguing with anybody about anything. Were I anxious to prove Jimmy’s statement, I would merely give you the only address at which the Arcadia is to be had. But that I will not do. It would be as rash as proposing a man with whom I am unacquainted for my club. You may not be worthy to smoke the Arcadia Mixture.

So, Craven mixture was famous, and Childers’s Raven mixture seems a fairly obvious bit of paronomasia. But, sadly, you can no longer buy Craven mixture. There is a modern copy of it from McClelland called, with a nod to all this history, Arcadia 221B, which you can buy online. But we didn’t have time for that.

So I made my way to the Segar and Snuff Parlour in the covered market at Covent Garden. Nestled into a corner behind a wooden figure of a Scots guard (with two left feet, I noticed), it’s a glorious little temple to the increasingly lost art of serious smoking. A window full of pipes and arcana, and inside a heady aroma that was reminiscent of the old leather furniture of a gentleman’s club and the smooth wooden surface of a file stock. 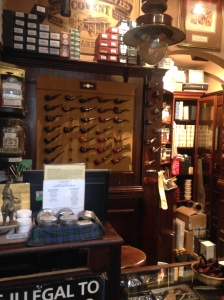 The manager of the place, Robert Good, listened to my story and though he hadn’t read The Riddle of the Sands, he did know all about Craven mixture, and he informed me that he sold a very close equivalent, called Classic English.

‘Virginia,’ he said, and I felt a little disappointed. Pretty common-or-garden stuff, Virginia tobacco. But then he leaned forward. ‘And latakia.’

I asked him to spell it, which he did. And then I asked him what on earth it was.

Latakia tobacco comes, originally, from Syria, and it would have been from there that Childers, Carruthers, Watson and Carreras (not to mention the Earl of Craven) sourced it. In these days of horror in Syria, the leaf comes from Cyprus. It’s mainly used as a condiment ingredient, as it’s potent stuff and can shift the taste of a blend in quite small amounts.

I don’t know the amounts Mr Good mixed it in with the Virginia, but when we tried smoking it (in a pipe secured from Mr Good’s parlour) we were pleasantly surprised by the smooth taste. I’ve seen latakia described as having cool smoking qualities, which fits it very well. The actual tobacco is rich and almost moist, a real revelation to this ex-cigarette smoker who had come to think of tobacco as dry, lifeless and oddly disgusting. Mr Good’s Classic English was nothing of the kind – it was deep brown and red, it had those lovely Edwardian smells, and the smoke it produced didn’t make me cough or retch, despite not having smoked anything for over a decade. It was, in summary, deeply pleasant.

So, I can see why Davies asked for his Raven mixture. With all the excitement to come, he is going to need something smooth, distinguished and cool to keep him relaxed. And, oddly enough, those qualities are all descriptive of Carruthers, too. 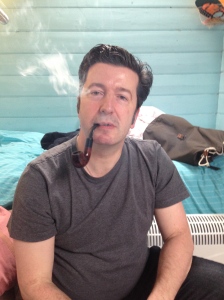 2 thoughts on “‘A pound of Raven mixture’”