In the opening chapter of The Riddle of the Sands, Carruthers is shaken from his bored torpor by a letter and a sort-of shopping list. (See September 23):

Bring your gun and a good lot of No. 4’s; and would you mind calling at Lancaster’s and asking for mine, and bringing it too? Bring some oilskins. Better get the eleven-shilling sort, jacket and trousers–not the ‘yachting’ brand; and if you paint bring your gear….

Would you mind bringing me out a prismatic compass, and a pound of Raven Mixture.

Very sorry, but there’s one other thing–a pair of rigging screws from Carey and Neilson’s, size 1 3/8, galvanized.’

That’s not the end of it, either. Carruthers replies by telegram to accept Davies’s offer, and he receives a telegram in reply with an additional item to be acquired: ‘Please bring a No. 3 Rippingille stove.’

The challenge was set. If we wanted to follow in Carruthers’s footsteps, we’d need to hunt down the same list of items. But where can you go shopping for galvinzed rigging screws in London these days?

Our first discovery: the name Carey & Neilson’s seems to be made up, though Carruthers says it is in the Minories, a street in the City of London that runs down to the Tower. There was indeed once a ship chandler there, called J.D. Potter, but it’s now a fast-food restaurant. 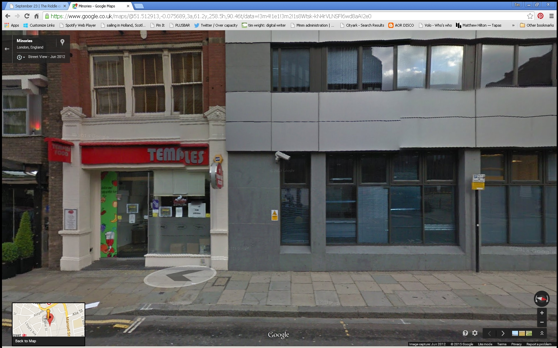 There was also a Nautical Academy in these parts run by Mrs Janet Taylor in the mid-19th century, but after a refreshing cup of tea at Temples we decide not to get distracted by the idea of  a woman running a nautical academy (for now) and stay on mission.

Soon enough it becomes clear to us that ship chandlers are actually a bit of a rarity in London in these days of online shopping. Truth be told, there’s only one remaining dedicated truly nautical chandler left within London. It’s Arthur Beale, on Shaftesbury Avenue at the end of Neal Street.

The shop is 400 years old, and these days its neighbours include The Astrology Shop and Forbidden Planet, two institutions which superstitious sea travellers might have found evocative.

It seems an odd place to find a ship chandler. The place moved here more than a century ago – before that, it was on the banks of the Fleet River, which these days runs underground, following the line of Farringdon Road. Tim, who makes hidden rivers his business, points out that there is even a tributary of the Fleet which trickled into Bloomsbury, as if following Arthur Beale out towards the West End.

Inside, Arthur Beale is a shrine to the resourceful independence of the sailor. Strange tools with exotic uses are pinned next to gorgeous steel and brass fittings, of a standard of craftsmanship you won’t find in your local DIY shed out on the ring road. You can, in here, imagine that Britain still makes the best ironmongery in the world, though Alasdair Flint, the shop’s proprietor, says that half the stuff they see is not of sufficient quality to stock. I don’t have the heart to ask where it’s all made, fearing the answer is China and not Birmingham.

Alasdair and his partner Gerry Jeatt bought Arthur Beale in April 2014 when the place was on its metaphorical knees. There’s a good deal of Arthur Davies in Alasdair Flint. He’s sailed to Spitsbergen in his 28-foot boat (smaller than the Dulcibella) -a distance of ‘one and a half thousand miles’, as Alasdair puts it, as if a thousand miles was an everyday unit of measurement like an inch or a yard. He has escaped a polar bear in an Arctic fjord. He has climbed into the world’s most northerly volcano. The thing that I like most of all is that he sets off for his nautical adventures from a mooring in Deptford. I can imagine Davies doing much the same.

We present Alasdair with the shopping list Carruthers receives from Davies. He knows of the Rippingille stove, but like us wonders if it would be possible for one man to carry such a monster all the way to Schleswig-Holstein. And he’s puzzled by the size of the 1 3/8 galvanised rigging screws. Is this a 1 3/8 thread – which would be gigantic – or a screw for a rope of 1 3/8 circumference? Thus we learn, indirectly, that rope can be sold by circumference. Alasdair promises he will get back to us. 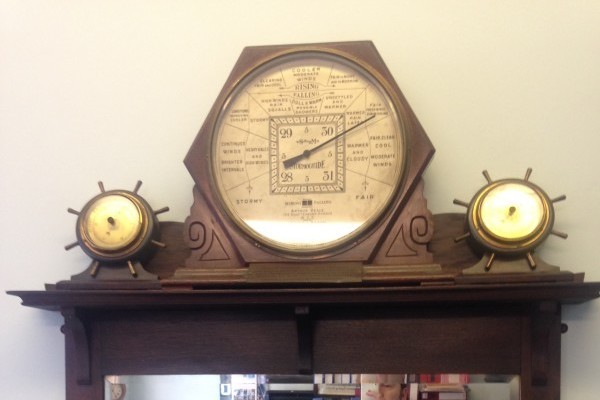 Alasdair takes us upstairs to the study, which has an old Shannon filing cabinet at one end and a huge Stormoguide barometer at the other, perched on top of a display case of ropes from ‘Buckingham Bros., Manufacturers of Ropes, Lines, Tarpawlings, Sacks &c’.

Alasdair shows us Shackleton’s signature on an order for ropes, and the invoice for equipment for an attempt on Everest. These little slips of paper are businesslike and unemotional, signed in pencil with appended messages such as ‘please ensure delivery by Thursday week.’

Alongside these relics of Britain’s adventuring past are oddly sad artefacts from a retail world now vanished – an old fax machine which Tim can remember writing about for a magazine in the 1980s, a credit card swiper with the forgotten name of Midland Bank, a drawer stuffed with instruction manuals for dot matrix printers and answer machines.

We leave without buying anything regret it immediately. We should, at least, have come away with a bolt or a hook or a chart, or even oilskins, which we could have sported on our walk down Kingsway to the river, to sniff the salt of the Thames.

It’s not the Arctic, and there are no polar bears, but every adventure needs a beginning, and ours starts here.

3 thoughts on “The last ship chandler in London”